On June 1st J4J’s Ian Saville was a guest speaker, on behalf of the Jewish Socialist Group, at a Brighton and Hove Momentum meeting on the current wave of expulsions and accusations of antisemitism in the Labour Party.  The main speaker was Jackie Walker, fresh from being reinstated after her period of suspension by the Labour Party. Louise Purbrick, from StopMfE also spoke about the local campaign against far right and fascist groups who are active in the area. This is Ian’s account of that meeting.

My own contribution outlined the way in which antisemitism has been used as a weapon to attack Jeremy Corbyn and the rest of the left.

I talked about how this had been a rolling campaign, brought up first to try to prevent Jeremy gaining the Labour leadership, continuing throughout his leadership, and stepped up significantly during the recent elections. And now continuing as we move towards the election of a new Labour NEC.

It is irrelevant that I am Jewish and don’t have a cat.

I pointed out that there are a range of people and organisations working to attack the left, including those outside the Labour Party, like the Tories, the Board of Deputies, the Jewish Chronicle and other apologists for Israel, and some factions on the right within the Labour Party. 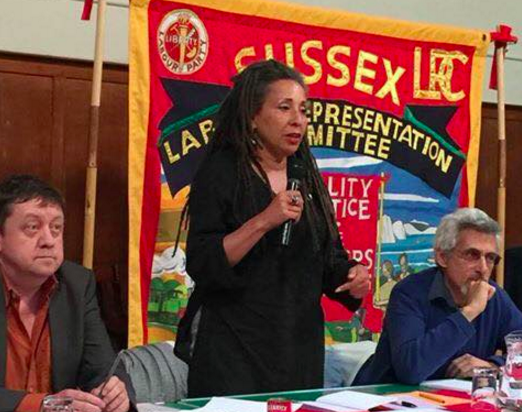 Jackie spoke of the enormous blow to her of her suspension, and the undemocratic way in which it was accomplished. She also noted that the letter informing her of suspension was sent on the same day that a scurrilous article about her appeared in the Jewish Chronicle, so that it appears that there was some coordination between the paper and the Labour Party compliance unit.

She spoke of the awful abuse she had suffered on social media, and the attacks had not let up since she had been exonerated and reinstated by the party. She was still being subjected to abuse and calls for expulsion, and lies about her views were being spread by the right.

In fact, before the meeting an inaccurate and vicious leaflet about her was being handed out by right-wingers outside. She was subjected to people questioning the validity of her own heritage, which is offensive and unacceptable. Jackie explained the background to the private remarks on Facebook which had been objected to, which were part of a discussion with friends, one of whom, ironically, is an Israeli liberal Zionist.

Jackie stressed the need to oppose these attacks vigorously, and not appease the attackers, as this will just strengthen their hand. Her speech was greeted with great acclaim.

Discussion from the floor followed, with many people making points about the role of Israel in all of this, the role of groups like the Jewish Labour Movement within the Labour Party, and the dire situation of the Palestinians.  Tony Greenstein, who is still under suspension from the party, contributed a fighting speech, to much applause.

There was some discussion of the events of that day, when a potential left candidate for the NEC, Rhea Wolfson, was blocked from standing after an intervention in the selection process by Jim Murphy, the right-wing former leader of the Scottish Labour Party.

Once again, the accusation of antisemitism had been brought up, despite the fact that Wolfson is Jewish, is supported by the Jewish Labour Movement, and is herself sympathetic to Zionism. This seems to demonstrate that, for the right, this accusation can be used in the most absurd situation, for the objective of gaining control of the Labour Party, and ensuring that Jeremy Corbyn’s ideas do not hold sway.

Following discussion of, and questions about the Jewish Labour Movement, I mentioned the initiative contained in our submission to the Chakrabarti Inquiry, to set up a more inclusive Jewish organisation within the Labour Party which is not part of any Zionist federation.

The meeting finished on an upbeat note with the singing of the Red Flag, led by local singer Robb Johnson.

Unsurprisingly, within 24 hours, the meeting has already been written up in a negative way by the Jewish Chronicle.

Articles on the Site